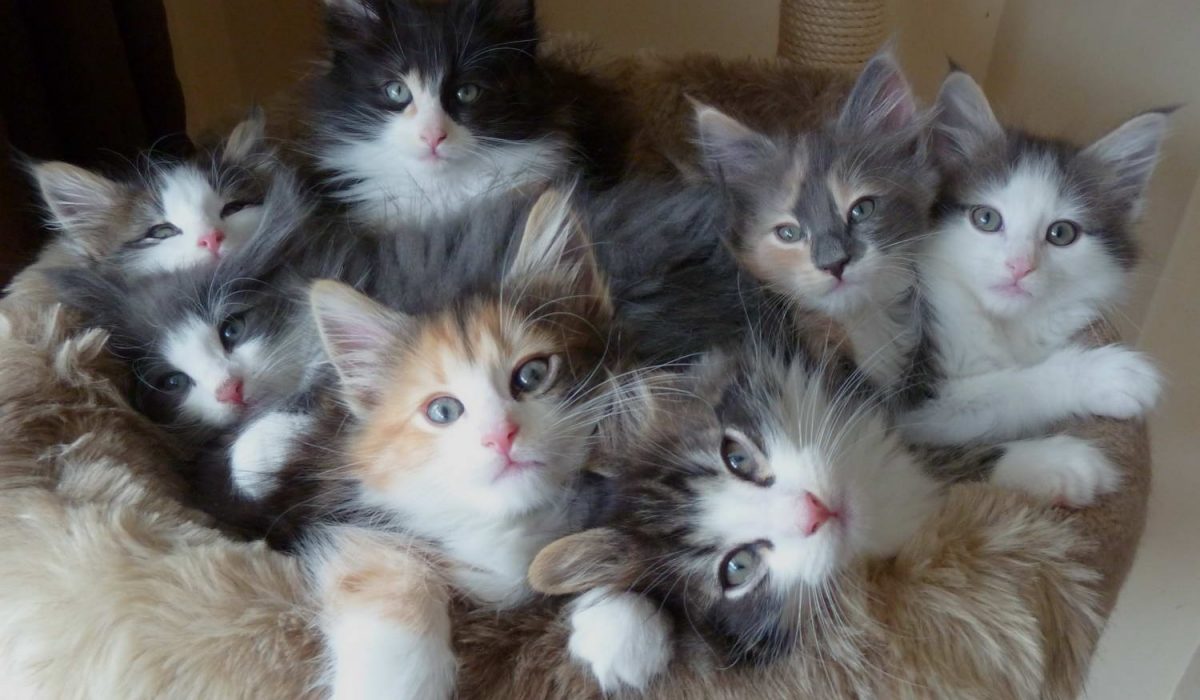 The furry guardians of the Norway forest, or your pet. Norwegian Forest cats are known for their fluffy coats, large builds, and social dispositions.

The long and lush fur and a magnificent tail without a doubt distinguishes the Norwegian Forest breed from all the others. Their neck, covered with fur, immediately brings to mind the picture of a lion. This thick fur was inherited from their ancestors, which lived in the cold Scandinavian region and had to protect themselves from the harsh Northern winter.

In legend, a magical cat weaves her way in and out of the trees in the forest, appearing and disappearing like magic. Sometimes all that can be seen is the long, thick furry tail. She knows what is happening around and even knows what’s in the heart of a man.

Norwegian myths tell of the skogkatt, a large, long-haired “mountain-dwelling fairy cat with an ability to climb sheer rock faces that other cats could not manage.” The skogkatt was beloved by Freya, the Norse goddess of love and beauty, who they say traveled in a feline-drawn chariot. And in one Norwegian tale, Thor loses a contest of strength to the tricky god Jormungand, who’s disguised as a skogkatt.

While Norwegian Forest cats don’t crack the top 10 most popular cat breeds in America, they do have a legion of loyal fans in Europe. The breed has survived the natural selection for many centuries, making it Norway’s most durable breed of withstanding the northern severe winter season.

Its ancestors may include black and white shorthair cats brought to Norway from Great Britain some time after 1000 AD by the Vikings, and longhaired cats brought to Norway by Crusaders. These cats could have reproduced with farm and feral stock and may have eventually evolved into the modern-day Norwegian Forest breed. The Siberian and the Turkish Angora, longhaired cats from Russia and Turkey, respectively, are also possible ancestors of the breed.

During World War II, the breed became nearly extinct until efforts by the Norwegian Forest Cat Club helped the breed by creating an official breeding program.

As the Norwegian Forest Cats are heavy-boned and tall, they eat more food than most other domestic breeds. Adult females of this breed will typically weigh 3.6 – 8 kg (8 – 18 lbs), while males tend to weigh 4.5 to 9 kg (10 – 20 lbs). The coat consists of a long, glossy, thick and water-repellent top layer and a woolly undercoat and is thickest at the legs, chest and head. The profile of the breed is generally straight. Their water-resistant coat with a dense undercoat developed to help the cat survive in the harsh Scandinavian climate.

The ears are large, wide at the base, and high set, have a tufted top, are placed in the extension of the triangle formed by the head, and end with a tuft of hair like the ears of the lynx. All coat colors and divisions in the traditional, sepia and mink categories are accepted. The breed is very good at climbing, since they have strong claws. Those cats that live primarily outdoors become swift and effective hunters, but the breed can also adapt to indoor life.

Norwegians like Maine Coons have the fur on the bottoms of their paws which sprout forth in tufts between the pads. It is important to clean your cat’s paws daily with a damp cloth because harsh substances that remain stuck on her paws can become ingested when she grooms herself. Feel her paws in between her toes and around her pads for any tiny foreign objects or debris that may be trapped in the fur.

The Norwegian must be groomed daily to keep the coat free from knots and tangles, especially during shedding season. This grooming can be incorporated into play time, but generally they enjoy being groomed. As with all thick coated cats, a hairball remedy may need to be given when regular shedding is occurring.

They need a balanced diet, rich in proteins and vitamin A. You should be very alert to them becoming overweight, because they tend to gain weight quite easily. A strong sturdy build is normal; but pudginess is definitely something to be avoided.

The lifespan is usually 14 to 16 years, though kidney (polycystic kidney disease, when lots of fluid-filled cysts develop in the kidneys, leading ultimately to kidney failure) and heart diseases (hypertrophic cardiomyopathy, a condition marked by thickening of the heart muscle) have been reported in the breed. The other most common health problems are hip dysplasia and retina injuries, which lead to restricted vision. One pathology that is particular to this breed is glycogen storage disease type IV, a rare genetic disorder that makes it difficult for his body to convert glucose, which causes serious muscular problems and is fatal. Fortunately, it is passed on through a recessive gene (which is to say that, for the cat to suffer from it, both the father and the mother must be carriers of the gene), which means that it is not terribly common.

The Norwegians are sweet, intelligent, loyal and friendly cats, slightly reserved with people they do not know, but very sociable with members of the family and even more so with other cats. They appreciate praise and make a loving companion and bond with their human parents once they accept them for their own. They do tend to follow their owner around the house. These cats are great with children. They have a lot of energy, love to play games and in general are very interactive. They’re not afraid of jumping and will often dive back down, headfirst. Investing in a climbing post is a good idea to keep them entertained.

Although they are a muscular they tend not to do well with dogs and high-energy pets as they get easily afraid.

They can take up to 5 years to mature, which means that you have time to ensure that they become familiar with your house rules.

The Norwegians have never forgotten their heritage. They are still hunters at heart. They love to chase toys as if they are real. They are territorial and patrol several times each day to make sure that all is fine.

We think that Panda and Penguin have some Norwegian relatives. What do you think? 🙂

Do you have a Norwegian Forest cat? Do you trim those fluffy fur tufts between the pads so that the paws wouldn’t be so slippery while zooming around the room? 🙂
Please, feel free to share your thoughts about this cats breed in the comments below.

Engine in the Butt or Scabs on the Nose

Feline Viral Rhinotracheitis and Our Cats