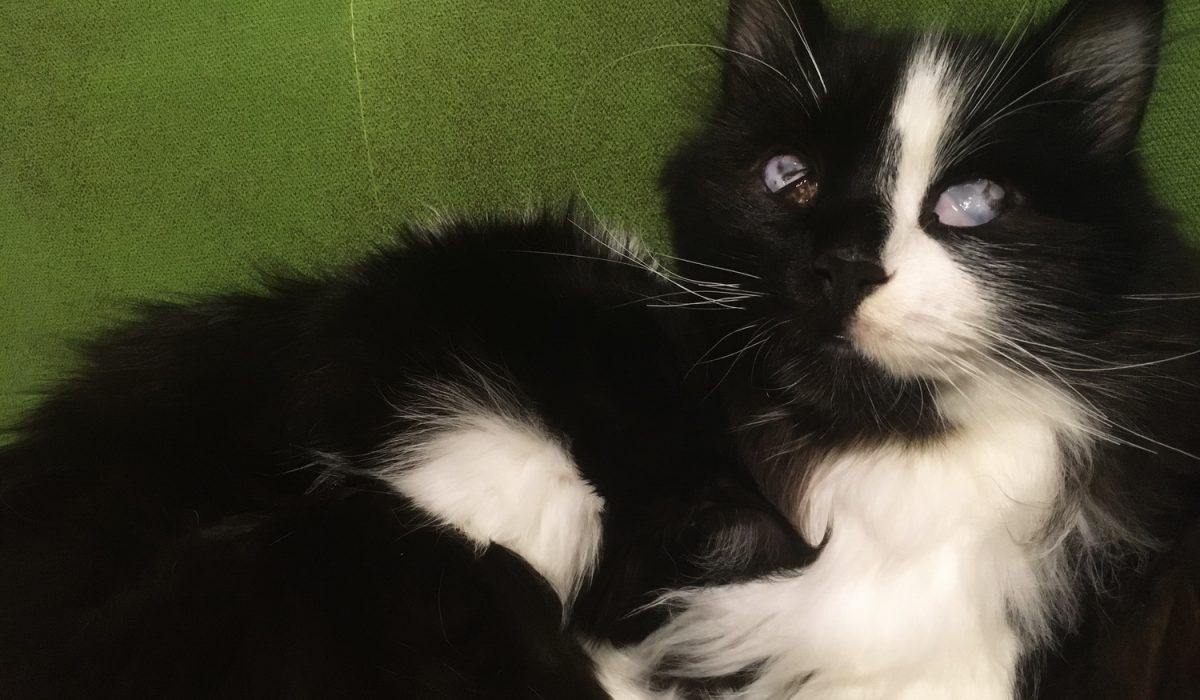 Feline Viral Rhinotracheitis and Our Cats

When we found Penguin and Panda, who were about 4 months old, their eyes were already in a bad condition. Penguins eyes were all covered with the white film and were very dry. One eye had some brown discharge from under the upper lid (he still has it and I am not sure what it is and if it is possible to reduce it. The vets said nothing about it). Penguin’s prescription was antibiotic drops, drops with Taurine, Thiotriazolin drops, and later just to use Hylo Comod drops for the treatment of dry eye (contains Sodium hyaluronate).

I am still not sure if I can do something more to help Penguin with his eyes to reduce fibrosed symblepharon and corneal scarring. I was told that the surgery is possible but more likely everything returns back. Also, it looks like his eyes are in quite a bad condition and there is no sense to do the surgery. If any vet is reading this, what are your thoughts? Do you think Penguin could benefit from the eye surgery? (Everyone says it was caused by Feline Herpesvirus (FHV-1), but I’ve also read that it could be a chemical injury to the eye. Not sure if such a damage could be caused by the car fumes. I have talked to the people in the area and they saw how Penguin and Panda were getting under the cars to stay warm when the were kittens, so maybe their eyes had been injured? Just a rhetorical question …

Panda didn’t have a left eye, but just a hole with lots of puss (with staphylococcus aureus) and brown dischage which was staining her white fur down the nose.

We were prescribed many drops including antibiotic drops. When we were using antibiotics, the puss was going away and the dischage was nearly getting away, the eye was clearer and not so red, but as soon as we stopped the drops, everything came back. So we kept Panda on antibiotic drops for several months until she grew up enough to have a double surgery – to remove that bad eye and to do a spaying (sterilization), as I didn’t want her to have anesthesia twice. In February 2020 when she was already about 9 months old, we did the surgery at a very vet good clinic. Everything went well. No more drops and worries about a bacterial infection! By removing this bad eye I am sure we have saved her other eye and possibly her life.

What have caused it?

So, when I saw my kittens in the street, I thought their eyes could be treated with some drops and other medications. Immediately, the same day I found them, I took them to the vet in our small town. I couldn’t believe, that nothing could be done with Penguin eyes, and for Panda, I understood she would need a surgery to remove what’s left from her left eye. I was soooo upset, but I believed I could make their lives better and safer for sure.

I have started to read everything about Feline viral rhinotracheitis and connected with it eye problems and found out that the cause of it is a Herpesvirus Infection, also known as Feline Viral Rhinotracheitis (FVR).

The Feline Herpesvirus (FHV-1) was first isolated in 1958. This is an infectious disease caused by feline herpesvirus type-1. The virus is very species specific, and is only known to cause infections in domestic and wild cats. Cats of all ages could be subject to infection.

FVR is a major cause of upper respiratory disease in cats, and is the most common cause of conjunctivitis (inflammation of the tissues surrounding the eye, especially the lining of the lids and the third eyelid).

The virus is spread in saliva and in discharges from the eyes and nose of an infected cat. So, a cat becomes infected with this virus by
direct contact with virus particles or with inanimate objects (e.g., clothing, food and water dishes, furniture) that have been contaminated with viral particles.

The virus can survive in the material as long as it stays moist. Fortunately the secretions usually dry up in a fairly short period of time, and once the secretion dries up the virus will die. Viral particles that get onto hands or other skin surfaces usually remain infective for about half an hour. The virus is readily killed in the environment by disinfectants, as long as the disinfectant contacts all contaminated surfaces. It could be soap, detergent, shampoo or any disinfectant.

Once a cat is infected with FVR, they will usually show disease symptoms in 2-5 days (incubation period of the disease). The cat can infect other cats during this incubation period. In most cases, once symptoms appear the active infection will last about 10-20 days.

Specific identification of FVR virus particles may be made by collecting samples of cells and discharges from the nose, eyes, or back of the throat.
The outlook is generally good except for young kittens and older cats. When the illness is prolonged, weight loss may be severe. Bacteria often infect cats that are already ill with feline viral rhinotracheitis.

All cats that have been infected with Feline Viral Rhinotracheitis will become carriers of this virus; most carriers will be latent, meaning that the virus will survive in an inactive form within the cat’s body. Stress and illness can cause the virus to become reactivated, and if the virus becomes reactivated, the cat will again be infectious.

I think this is how Penguin and Panda got their disease, they have been infected by their mother.

What are the symptoms and complications?

The typical symptoms of Feline Viral Rhinotracheitis involve the nose, throat and eyes, and include sneezing, nasal congestion, inflammation of the lining of the nose (rhinitis), conjunctivitis (inflammation of the tissues that line the eyelids and surround the eyes), excessive blinking, squinting and discharges from the eyes and nose that range from clear and watery to thick and purulent (containing yellow/green pus)
and often salivation. Other non-specific symptoms may include fever, lethargy, anorexia (poor appetite), and enlarged lymph nodes.

The virus may also cause keratitis, or inflammation and infection of the cornea, leading to corneal ulcers. In chronic or severe infections, the keratitis can lead to corneal scarring or chronic ‘dry eye’ (keratoconjunctivitis sicca or KCS).

A common secondary complication of corneal ulceration associated with herpes is symblepharon, in which the erosive surfaces of the conjunctiva and cornea adhere to each other. Adhesions lasting beyond a few days can permanently fibrose. Ideally, during an active herpes infection, any early conjunctival-corneal adhesions should be broken down every 2 – 3 days with a cotton applicator to prevent fibrosis. Fibrosis can also be inhibited by decreasing the factors (fibrinogen, thromboplastin, and other clotting factors) associated with fibrin production. Frequent lubrication, medication, and flushes of the eye can reduce these factors.

Infection involving the eyes may be treated with topical eye medications. It is extremely important to treat corneal ulcers aggressively in order to prevent permanent damage to the eyes. Cats with recurrent FVR conjunctivitis infections will often require treatment with antiviral ophthalmic drops or oral anti-viral medications such as famciclovir (brand name Famvir®). Some cats may respond to supplementation with L-lysine,
an amino acid that may help reduce the severity of the disease as well as decreasing spread of the infection.

Kittens commonly present with ocular manifestations of FHV-1 infection. Professional treatments can often alleviate their clinical signs of herpes. It has to be done in time and for sure under your vets supervision.

I am sure if I would have found and took Panda and Penguin home earlier we could save their eyes. But that time it was too late 🙁

Cats with an uncomplicated infection caused by FVR will usually be treated symptomatically.

A probiotic called FortiFlora® has been proven effective at reducing the length of illness.

Cats with nasal or airway congestion may benefit from increased environmental humidification.

To minimize irritation from discharges, it is often helpful to wipe them away from the cat’s face or eyes with a moist tissue. Since cats with a respiratory infection will have a decreased sense of smell, they often have a decreased appetite – feeding a highly palatable and strong-smelling canned food may help improve their appetite.

Please, be aware: A cat that has an acute FVR infection will be infective to other cats during the incubation period and for up to three weeks after developing symptoms. A cat that is a carrier may always be infective to other cats. The risk of infection increases in cats that are unvaccinated, are young, or have chronic underlying problems. Adult cats that have been adequately vaccinated will likely only develop a mild case of illness, which may resolve without treatment.

We know this, so we cannot bring any other cats home now. Just remember that it is always prudent to isolate any new cat from the other cats in your household for at least one to two weeks to minimize transmission of any infectious diseases.

After reading, that Feline viral rhinotracheitis is caused by the herpesvirus, I have started to worry if it is contageous for people.

The upper respiratory infection that is caused by feline viral rhinotracheitis is only infectious to other cats. However, upper respiratory infections in cats can be caused by or complicated by bacterial infections, some of which might be contagious to humans. But if you follow good hygiene practices including proper hand washing after handling any cat, you will minimize the chance that you can get an illness from this or any other infectious disease.

How can this disease be prevented?

The standard core vaccines that are given to cats include a vaccine against feline viral rhinotracheitis. The FVR vaccine will not completely prevent an infection from occurring if your cat is exposed to the virus, but it will significantly reduce the severity of the infection and will shorten the length of the illness. Solid immunity to these viruses is not long term, and may be overcome by exposure to a high dose of virus. Therefore, the FVR vaccine needs to be boostered on a regular basis.

A cat that is a carrier of FVR may benefit from periodic boosters with the intranasal herpes and calicivirus vaccine (up to 2-3 times per year), which may prevent reactivation of the virus, thus decreasing the likelihood of recurrent infection and of viral shedding.

Keep in mind that boarding facilities, humane societies, animal shelters, and cat shows are all places where susceptible cats can be readily exposed to these infectious diseases.

Preventing direct contact between your cat and other cats will greatly minimize the chance that your cat will pick up an infection, while following good sanitation and hygiene practices, such as washing your hands thoroughly before and after petting another cat, will further reduce the likelihood of disease spread between cats.

If your cat has had a FVR infection, you should keep her indoors to prevent spread of this infection to other cats in your neighborhood.
That’s what we do for Penguin and Panda. They are our indoor cats whom we adore!

There is no cure for herpesvirus infections. The therapeutic goal is to reduce the frequency and severity of recurrences. Most cats respond well to medical management of the condition and lead normal lives. Minimizing the chance of infection, ensuring excellent nutrition by feeding a veterinary-recommended diet, reducing stressful situations, and following an appropriate vaccination schedule are your cat’s best defense against this disease.