We are Penguin and Panda, a brother and a sister. We were born probably in May 2019, somewhere in the basement of a big building, just next to the construction site.

We were not the only newborn babies, there were other borthers and sisters, at least 2 more which we could remember.

When we grew up a little, our Mum took us all out to the sun and introduced us to the street with lots of dangerous but interesting things. It was spring and the weather has been getting better and better, the sun was getting warmer and the birds were singing. We loved so much to feel the soft green grass while bathing in the warm sun rays drinking mother's milk.

I am not sure when and why only two us have been left: me, the Penguin and Panda, my sister. Later we found out from people that all other our brothers and sisters have died.

We were the only black and white kittens out of all. Maybe we were lucky to wear Tuxedo, it gave us strength.

For some reason, our mother rejected me early, but she was still feeding my sister Panda, so I had to start looking for food on my own. There were several garbage bins just next to our lovely flowerbed where we liked to play. We followed our Mum and understood that we could find something there.

Humans were bringing us and other neighbor cats and dogs some leftovers, so there was always someting to eat. Constuction workers were feeding us from time to time, so that’s when we have even tasted some fish! Panda has joined me as well, but she was still drinking mother’s milk.

There were lots of dogs around, especially near the garbage bins, so we had to be careful and alert all the time.

I cannot say exactly when I have started to loose my vision. Probably after that sickness we all had when we were still very small. I have learnt how to cope with it. I have been out in the mornings and evenings, but hiding during the day. Panda have been spending lots of time with our mother. Sometimes I also tried to be with them, I wanted that milk, but she was pushing me away.

My little sister also had problems with her one eye. It was always leaking, staining all her little face down her nose. At some point, there was no eye anymore, but only that crazy irritating discharge.

But despite all, we are kittens, we love to play! We loved running around, chasing each other, jumping on the wheels under the car hoods on the parking lot, and just getting crazy. During one of such games one man has noticed us. Nearly every evening he was waiting for us at the parking lot. Every time he was brining us some cat food, so we have started to get used to him. 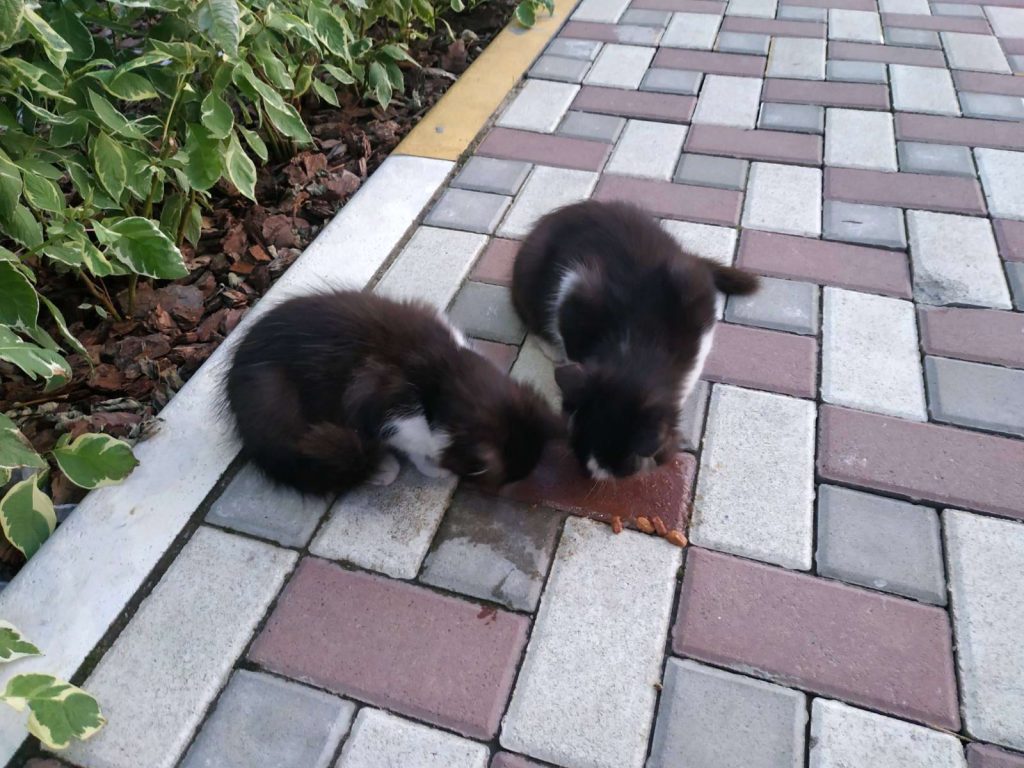 Later we found out he had two cats at home, a boy without a leg and a girl without a tale.

We never let other humans touch us or even approach us, but this man has managed to tame us but just a little. One day he brought some eye drops and tried to treat our eyes. For sure we didn’t like it and tried to avoid this unpleasand prosedure.

Once he called a girl who was passing by to help him to catch and hold us while he would put the drops in our eyes. Later this girl became our human Mum, but we didn’t know it at that time.

She has started to feed us every day, so several times, while Panda has been in the bushes with our cat mother drinking milk, I has tried to follow this girl home, but she was sending me back to Panda and our Mum.

It was September, I remember this day, September 16th, 2019. We were about 4 months old. I was hiding during a day as usual, but when I came back to the parking lot in the evening, I couldn’t find Panda. I saw the girl, she has brought me some food and I started to eat. Suddenly after I have finished, she has caught me and put into a cage. Several minutes later I have been on the vets table at the veterinarian clinic. After that we came home where I have found Panda. Whew! I have been relieved to find her there and Panda was so happy to see me! Panda told me she was caught the same way, but earlier during the day. The girl couldn’t find me that time because I was hiding as usual. So, this is how we have found our home and our humans.

A note from our human Mum:

My name is Olena. We had a lovely cat Blackie, who has been our buddy for 14 years. He has crossed the rainbow bridge 3 years ago on September 14th, 2016. After that, we have decided not to have cats anymore as it was so difficult to loose our dear Blackie.

Penguin and Panda came to us at exactly this time, but 3 years later. The timing was absolutely incredible. On the 14th of September 2019, just several days after I have been asked to help to put drops in their eyes, I’ve started to plan to take these kittens from the street.

We had a bond from the first day I saw them. Penguin followed me several times without seeing where he goes. He knew I was preparing things. On September 16th straight after the vets appointments we took them home.

I know, this was Blackie’s plan. Now he is smiling behind the rainbow 🙂 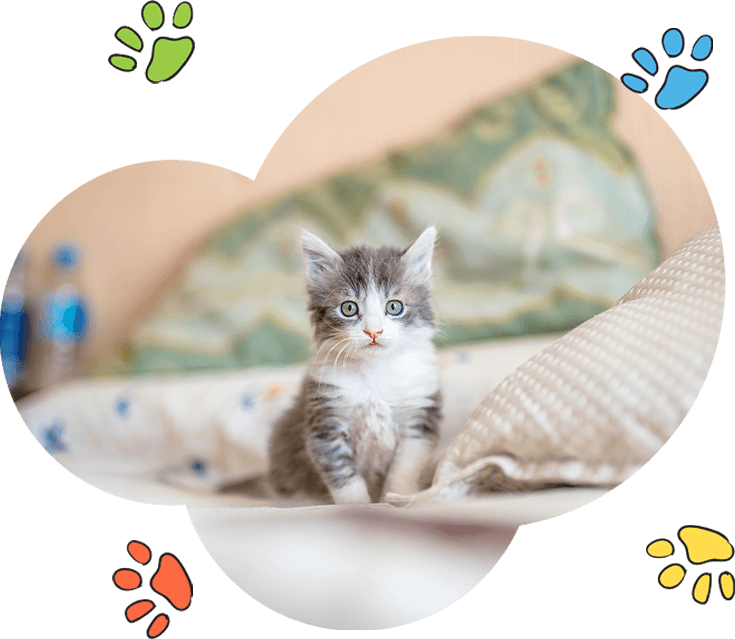 Animals and everything about them.

Only one year old.

We found Penguin and Panda when their eyes already have been in a bad condition. Those are complications after the Feline viral rhinotracheitis (FVR).